2005 Inductions for the MWCA David Bartelma Wrestling Hall of Fame were held on Saturday, March 13, 2005 at Augsburg College, Minneapolis, Minnesota. 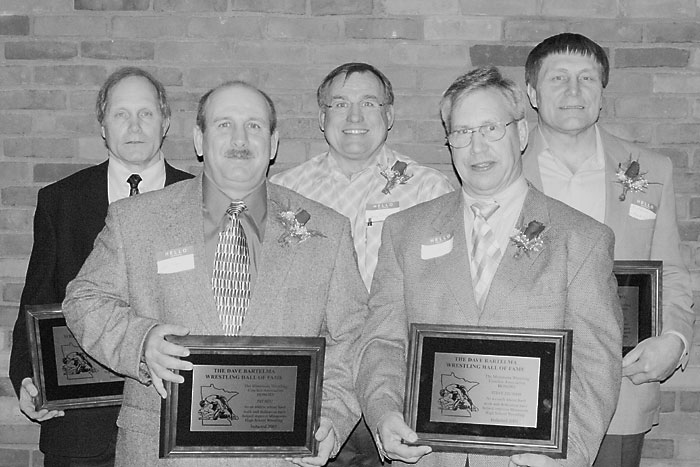 Jeff was a 1970 graduate of Robbinsdale Cooper High School. He was a two time Minnesota State Champion, winning titles at 112 lbs. in 1969 and 120 lbs. in 1970, both under the old “one-class” system. His high school record was 52-4. In his senior year Jeff was selected to the “National Wrestling Coaches Assocation.” Only 50 wrestlers in the country receive this awared each year. He was also voted WCCO Honor Roll “Prep Athlete of the Week.”

Jeff went on to attend the University of Minnestoa, where he earned a Bachelor of Science Degree in Physical Education, Health, and later a Master’s in Health Science.

Jeff and his wife Brenda reside in Excelsior, Minnesota. They have two children, Sarah (23) and Paul (22).

Jerry graduated from Staples High School in 1967. He was a 4-time District 24 Champion and a 2-time state placewinner (2nd in 1966 and 3rd in 1967 in the old “one class” system). Jerry wrestled for Itasca Community College (4th in NJCAA at 142 lbs. in 1968 and also for Bemidji State University in NAIA Nationals.) Jerry continued his success on the mat in his coaching as well. He coached at Elbow Lake High School, at Cambridge High School, and at Cass Lake-Bena-Blackduck. He attained a win loss record of 197-145-3. He coached two teams to the MN State High SchoolTournament (1997 and 1998). He and co-coach Steve Bechtold were named Coaches of the Year for Class AA in 1998. His third place team in 1998 was also named the State AA Academic Champions. Jerry served as a section rep for Region 8 from 1990-1998. He has also served as a referee. His has been a member of the VFW and American Legion for over 30 years. Jerry is currently residing in Pierre, South Dakota. He is Principal at White River High School. He and his wife Hedi have 2 children, Serena and Dylan. Jerry also has three other children: Kim, Sam, and Vanessa.

Pat was a 3 time state place winner from Paynesville High Schoolin the old “one class” MN State Wrestling Tournament. His high school record was 103-12-6. He was a two-time Big Ten Conference runner-up his junior and senior year. He went on to become a NCAA Division I National Champion at 134 pounds in 1977 for the University of Minnesota, ending his college career with a 136-32 record.

Pat successfully ran a plumbing company for a number of years. After selling his company, Pat looked for ways to give back to the sport of wrestling. He helped coach in the Waconia community for a couple of years. He then remodeled a building on his private land with two full wrestling mats. (affectionately known as “the shed”.) He gave individualized instruction to anyone who would show up. He drew not only from the Waconia and Watertown area, but also Mound, Norwood Young America, Glencoe, Plymouth, Wayzata, and Dassel Cokato.

Steve was a 1973 graduate of St. John’s Prep. He was a 2-time state place winner in the MN Private School State Tournament, placing second his senior year. Steve’s college career at St. John’s was shortened by injury, and he began coaching wrestling in 1974 as an assistant to Maury Meyer. He was the head coach at St. John’s Prep for one year before moving to Blackduck in 1976. Steve was the head coach at Blackduck until 1990 when Blackduck formed a co-op with Cass Lake-Bena, and he has been the head coach of the BCLB Bears since. BCLB made four trips to the state tournament from 1997-2000 and finished third in 1998. Steve has amassed a coaching record of 316-211-5. Steve has given of his time and energy to the sport of wrestling for over 30 years. Steve is known as a great organizer and as a great promoter of wrestling. With Ron Milbrandt he founded the Big Bear tournament, one of the most prestigious tournaments in Minnesota. He has written a column entitled Northland News which appeared in The Guillotine for a few years. Steve has served as Section 8AA Representative for a number of years and has served on the state wrestling advisory committee the last few years. He and his wife Helen live in Hines, MN. They have four children who have all been involved in BCLB wrestling: Teresa, Thomas, Paul, and Joseph.

Steve was a 1964 graduate of Hopkins High School. He attended Bemidji State University, graduating from there with a degree in Social Studies in 1969. Steve started the wrestling program at Verndale, coaching there from 1973-1981. He then coached Bertha-Hewitt-Verndale from 1982 thru today. Steve has amassed a coaching record of 358-156-8. Steve’s teams have won the Section 7A title in 1999, 2000, 2001, and 2002. Steve’s team in 2001 placed 2nd that year. His teams are known for being excellent technicians and fierce competitors. Steve has served as the Section 7A representative for a number of years. Steve and his wife Katherine reside in Deer Creek and have two children, Lori and Melissa.