The Mayo Civic Center Region I Wrestling Alumni inducted six new members into the MCC Region I Hall of Fame at The SEMWREC Banquet on Monday, March 5, 2012 at The Downtown Marriot in Rochester, Minn. 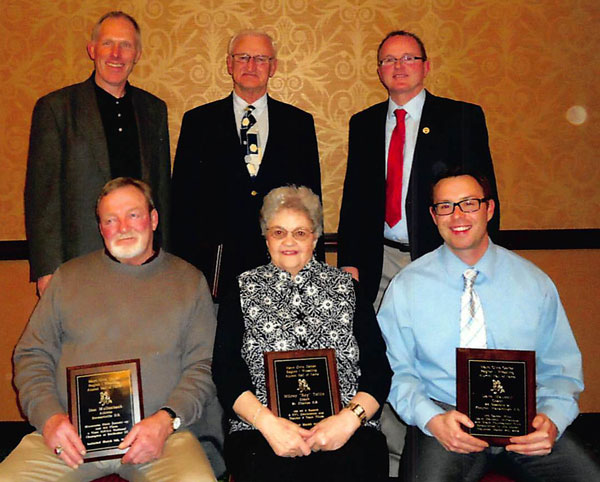 Darrel Jaeger
The long-time Stewartville Coach had an outstanding 166-7-7 coaching record, along with a number of District 3 and Hiawatha Conference Championships,. Darrel coached numerous state entrants and place winners.

Dave Mauseth
Head coach for twenty-six seasons at Kenyon-Wanamingo, Dave was a standout wrestler at Owatonna High School, and Mankato State University. Dave coached a number of state entrants and state placers, and he had 140 career wins. Dave, who passed away in May of 2011, recently had the Kenyon-Wanamingo Invitational renamed in his honor. A “Dave Mauseth State Tournamet Club” Plaque has been put up in the trophy display area at Kenyon-Wanamingo as well.

Steve Devries
This Rochester Mayo state runnerup is part of the first father-son combination in the MCC Hall of Fame. Father “Dutch” was inducted in 2011 as a Contributor. Steve was a Big 10 Champion for The Iowa Hawkeyes. He was ranked No. 1 in the NCAA at 35-0, before an injury ended his season. Steve had an outstanding coaching career at Cornell College in Mt. Vernon, IA which includes recently being inducted into the NCAA Hall of Fame!

Don Mullenbach
Don was a high school state runner up at Stewartville High School. He was a two-time NJCAA National Champion and a Hall of Fame member at Rochester Community College, where he competed under legendary coach John Philo in 1965 and 1966.

Bill Olson
Bill wrestled for Le Roy High School. The Le Roy-Ostrander 1976 graduate was a state entrant that year as well. Bill was a six-year letter winner. He also lettered at Waldorf College and Winona State. Bill was an official for twenty-four years, working twelve MSHSL State Tournaments, and eighteen Section I Tournaments.