The Short family from Minnesota will receive the Family Legacy Award

WATERLOO, Iowa–The National Wrestling Hall of Fame Dan Gable Museum will induct Matt Ghaffari and Dennis Koslowski into the Alan & Gloria Rice Greco-Roman Hall of Champions. An induction ceremony will take place on Saturday, October 20, 2012, at the Kennedy Center on the campus of Augsburg College in Minneapolis, Minn.

Alan and Gloria Rice, namesakes of the hall of champions, have been instrumental to the success of Greco-Roman wrestling in the United States. Alan Rice was a Big Ten champion and an All-American for the University of Minnesota. In 1956 he won double national titles in Greco-Roman and freestyle. He also placed fifth at the 1956 Olympics and was coach of the 1972 Greco-Roman Olympic team.

He and his wife, Gloria, founded the Minnesota Wrestling Club. The club enjoys the unique distinction of placing a wrestler on every World and Olympic team since 1964, a record unequaled in American wrestling history. The Alan & Gloria Rice Greco-Roman Hall of Champions is located inside the Dan Gable Museum in Waterloo.

“I’m glad to have another opportunity to recognize the great champions of Greco-Roman wrestling,” said Rice. “I am looking forward to continued success at the World Championships and the Olympic Games.” 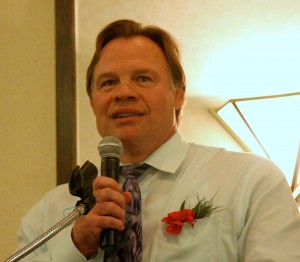 Wayne Baughman will be given the Alan Rice Leadership Award for his contributions to advancing the sport of wrestling. Baughman won 16 national titles during his career in four different styles of wrestling (collegiate, freestyle, Greco-Roman, and sambo). He was also a member of the 1964, 1968, and 1972 Greco-Roman Olympic teams for the United States. Baughman coached the 1976 freestyle Olympic team to six medals.

The Short family from Minnesota will receive the Family Legacy Award. The award is given to a family that has excelled in wrestling. Jim and Pat Short had four sons—John, Chris, Will, and Wade—who combined for seven individual state championships at Simley High School. All four had wrestling careers at the University of Minnesota, with Chris and Will earning All-American honors.

Jim and Will combined to coach Simley to nine state team titles (five for Jim, two for Will, and two for Jim and Will as co-head coaches). Jim’s wife, Pat, mother to the four champions, is also heavily involved in wrestling. As a volunteer she has worked many major tournaments including the 1996 Atlanta Olympic Games as a pairer and director.

Contact the National Wrestling Hall of Fame Dan Gable Museum at (319) 233-0745 or dgmstaff@nwhof.org to order tickets banquet tickets. You can also order tickets online at http://dgm-nwhof.ticketleap.com/grhoc/.