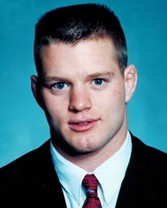 He will be honored at a ceremony on Thursday at the Hilton DoubleTree Hotel in Cedar Rapids. A social hour begins at 6 p.m., with the event to follow at 7 p.m. Joining Hoialmen in the induction class of 2014 are wrestlers Matt Pyle of Luther College (Iowa) and Dustin Hinschberger of Wartburg College (Iowa), Rochester Institute of Technology (N.Y.) coach Scott Stever and former Wisconsin-Eau Claire coach Don Parker.

A three-time All-American, Armbruster won the NCAA Division III national championship for Augsburg College at 126 pounds in 1995, while placing second in at 134 pounds in 1996 and third at 126 pounds in 1994. Armbruster was a part of Auggie squads that won the NCAA Division III national title in both 1993 and 1995, while placing second in 1996 and fourth in 1994. Auggie teams had a 51-8 dual-meet record during Armbruster’s tenure, including a perfect 16-0 season in 1994-95, while winning the Minnesota Intercollegiate Athletic Conference championship each of his four years.

In 1995, Armbruster was one of the keys to Augsburg’s rally to win the national championship, its third in a five-year span. Entering the final round, Augsburg trailed Trenton State (N.J.) by a 76.5-to-75.5 margin, but Armbruster claimed a 16-6 win over Tom Smith of Wartburg (Iowa) to give the Auggies an 80.0-to-76.5 advantage – a lead the Auggies did not relinquish. Augsburg later clinched the national title when Tom Layte won the title at 150 pounds.

Following his collegiate career, Armbruster served as a student assistant coach on Augsburg’s 1997 national championship team, then returned to his hometown of Faribault, Minn., to serve his high school’s wrestling program. He has spent the last 21 seasons on the Faribault High School wrestling staff, including the last 12 seasons as head coach.