In a wrestling site’s review of the original, TO BE THE BEST, the reviewer noted, “Hertel does an excellent job of capturing the essence of what our sport is about. Wrestling is more about overcoming obstacles than anything else.  Some wrestlers are athletically gifted, while others are not.  It shows how hard work and dedication can help overcome deficiencies; all in all it shows what wrestling is.” This same spirit is captured in TO BE THE BEST : PREQUEL, a twelve-part series which began this month. 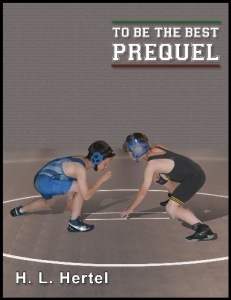 The PREQUEL series can be downloaded for FREE each month at hhcastle-mac.com. It explores the lives of the wrestlers before the original TO BE THE BEST and gives some of the “aha” moments as to why they realized they needed to push themselves harder in order to excel. It also reveals some background of the outside influences (girls, middle school cliques, etc.) that helped shape the wrestlers into who they became in the novels.

The initial year’s installments focus on Nick Castle as a freshman which naturally include some overlap with Ron Castle during his sophomore year push toward the state title match.

Author H. L. Hertel commented that, “This is a series that has been a lot of fun to write. It enabled me to set a bit lighter tone than that of the novels and is designed for readers new to TO BE THE BEST while throwing in some fun inside references which long-time readers of the TO BE THE BEST series have enjoyed.”

More information and the free download is available at HHCastle-Mac.com.