Anybody can be a hero. It’s not just reserved for the most talented or the people at the top. Actually, the stories we remember best are about the unlikely heroes. These are people who rise up and accomplish something amazing. In all my years of participating, coaching and watching wrestling, the most memorable example of unlikely heroics I witnessed occurred on February 24th, 1981 on the campus of St. John’s University in Minnesota.

As the crowd slowly trickled into the arena, you could feel the excitement build as the battle we prepared for all year was about to begin. We were wrestling for the Region 5A crown and a trip to the state tournament, something no team in Monticello history had ever accomplished. We were wrestling against the undefeated, defending champions; the state’s 5th ranked team, a team that handled us at home a month earlier. We were underdogs, but we were ready for a fight.

It was a long season full of mostly ups and a few downs. After a midnight practice after a lopsided loss to rival Buffalo, we were getting better and gaining momentum. We knew that if we all wrestled well, we could beat Paynesville, who we despised even more than our conference rival St. Michael-Albertville. Paynesville’s green-striped uniforms were as ugly as their mascot, the Bulldog, and we were tired of them finishing on top year-after-year.

Wrestling is a team sport fought one person at a time. It’s you against the other guy until one hand is raised at the end of the match. Each match counts exactly the same, so everyone’s effort matters the same. What you do on the mat affects every person sitting on the bench screaming your name.

We knew that to beat the powerful Bulldogs we all had to do our part and do our best. Not all of us were expected to win, but even how you lose is as important as how you win. Not giving up extra bonus points could be the difference between victory and defeat for the team.

We had a team with some stars, including two state champions, but our fate was going to be decided by everyone else. The stars would do their part, as expected, but it was the unexpected that saved the day. One heroic effort stands out above the rest. 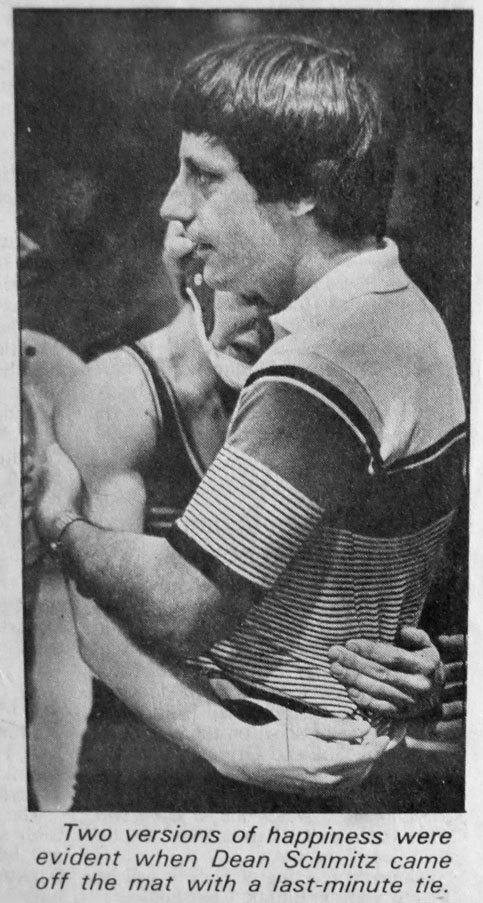 The dual was going as expected until the sixth match of the evening. We had won four of the first five matches, but the heart of Paynesville’s lineup was coming up. Next up was Dean Schmitz, who was facing one of their best wrestlers. Dean wasn’t one of our best wrestlers so we were hoping Dean wouldn’t give up bonus points or get pinned. He knew his role as he entered the ring.

To the surprise of everyone in the arena, with the exception of Dean’s number one fan, his sister Karen, Dean was only behind by one going into the third period. Dean took his turn on the bottom and the Bulldog rode him tough. Dean was exhausted, but there was something inside him that kept him going. About half way through the third period, we stopped worrying about Dean getting pinned and started to believe that Dean could actually win. The fans picked up on the excitement and started a loud chant that continued through the last minute of the period; “Go Dean Go, Go Dean Go, Go Dean Go.” Wrestlers don’t often hear the screams of the fans, but this was different. The arena shook with each chant.

Dean struggled to his feet five times and was brought down five times. With 15 seconds to go in the match, Dean struggled to his feet again and this time managed to escape. The chanting stopped and the screaming began. The buzzer sounded, ending the battle in a 4-4 tie. Each team was awarded two team points for the tie, but it was the most important team points of the match. Leaving all of his energy on the mat, Dean staggered to the bench and collapsed, sobbing in the arms of Coach Pullen.

We had 12 wrestlers doing their part that day, but it was Dean’s unlikely heroics that saved the day. The dual ended in a 23-23 tie, but we won the tiebreaker since we won six matches, they won five and we had an unlikely tie from an unlikely hero.

My memories of that chant and of Dean’s heroics are as vivid today as they were 30 years ago. When ordinary people do the extraordinary, people notice and remember. Our victory 30 years ago was a team effort, but that victory illustrates that everyone has the ability to rise up, seize the moment and become an unlikely hero.