MINNEAPOLIS — Augsburg College has solidified the roles of wrestling coaches Jim Moulsoff and Tony Valek ’12 as the full-time head coach and associate head coach of the program following an internal search process, the college announced on Friday. 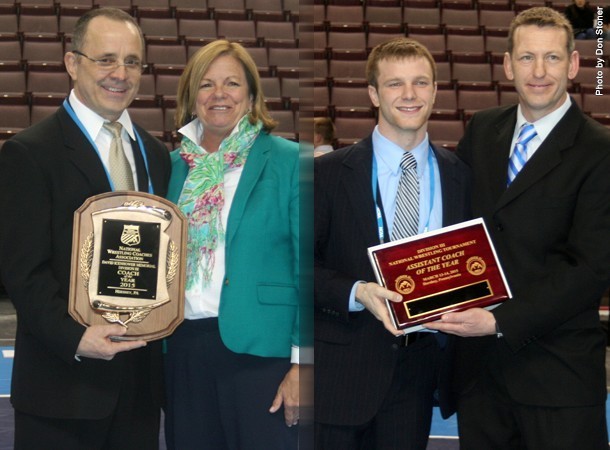 “We have a winning combination in Jim and Tony, and it’s an incredibly positive team. They have the same philosophies, yet totally different skill sets that compliment each other,” said Augsburg Athletic Director Jeff Swenson. “I think that Jim and Tony have done an incredible job this year. Their student-athletes have great respect for them, and overachieved because of the trust and relationships the coaches have built with them.”

“I would like to thank Augsburg College, Augsburg President Paul Pribbenow, Athletic Director Jeff Swenson and the entire athletic department for the opportunity to lead this historic program. It is an honor and a privilege,” Moulsoff said. “I would also like to thank the Augsburg wrestling alumni and family members for their continued support of the entire staff, as we continue the ‘Pursuit of Excellence.'”

Moulsoff is the 10th head coach in the history of Augsburg’s wrestling program. He served as an assistant coach for seven years, and also serves as the director of the James Haglund Family Fitness and Recreation Center in the athletic department. Last year, he was named West Region Assistant Coach of the Year by his coaching peers.

“Jim has earned the right to continue to lead this program. He’s been here for eight years and in the last two years, he’s received four different ‘Coach of the Year’ awards,” Swenson said. “He genuinely cares about everybody — his student-athletes, his staff, Augsburg College, the athletic program and the wrestling program.”

A 2012 Augsburg alumnus, Valek has been a part of the Auggie coaching staff for three seasons, and previously served as a graduate fellow in the athletic department.

As one of the most accomplished lightweight wrestlers in school history, Valek finished his four-year career with a 136-25 record. A four-time national tournament qualifier, Valek earned All-American honors three times and finished as national runner-up at 149 pounds in both 2011 and 2010.

Valek was a top performer in the classroom as well, as he was named to the Capital One Academic All-District (CoSIDA) men’s at-large team twice during his four-year career. He earned National Wrestling Coaches Association Division III Scholar All-America honors his final three seasons, and was named as the recipient of the prestigious NCAA Elite 89 Award as the student-athlete with the highest cumulative grade-point average at the 2012 NCAA Division III Wrestling National Championships. Valek was the first Augsburg student-athlete ever to be named as a first-team CoSIDA Academic All-America honoree twice. He earned his bachelor’s degree from Augsburg in 2012, and his master’s degree from Augsburg in 2014.