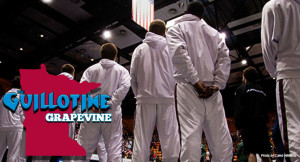 We’ll also visit with UW-La Crosse head coach Dave Malecek as he talks about why he recruits the state of Minnesota. There are numerous Minnesota natives throughout the Eagles lineup. We’ll also catch up with former Auggie Donny Wichmann, who was in attendance as the school honored the 1991 National Championship team, the first wrestling title won by the school. Wichmann was an assistant coach on that team.