It is exactly one month before the 2016 U.S. Olympic Team Trials for Wrestling will be held at Carver-Hawkeye Arena in Iowa City, Iowa, April 9-10. 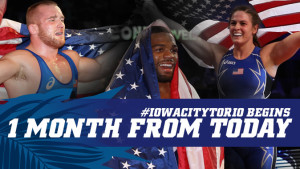 Ticket sales are strong, ahead of the pace for the sold-out 2012 U.S. Olympic Team Trials, which was also held at Carver-Hawkeye Arena. Fans who wish to attend should order their tickets and make all travel and housing arrangements as soon as possible.

All-session tickets to the U.S. Olympic Wrestling Team Trials are available for purchase. All-session options include adult ($75), and youth (18 and younger, $50). VIP tickets are sold out. Fans can purchase tickets at Carver-Hawkeye Arena, over the phone at 1-800-IA-HAWKS, or online at iowacitytorio.com.

There are only three #Road2IowaCity Trials Qualifiers left, which will finalize the field for the U.S. Olympic Team Trials.

The next #Road2IowaCity Trials Qualifiers will be the NCAA Div. I Championships at Madison Square Garden in New York, N.Y., March 17-19. The 2016 NCAA Div. I champion in each weight class qualifies to compete in the U.S. Olympic Team Trials in both freestyle and Greco-Roman.

Space in the April 8 Friday Night VIP Night is filling up. We’re still accepting complimentary VIP Ticket Holders RSVPs and selling tickets to Non-VIP Ticket Holders until March 21,  The full night includes a meal, Royce Alger as entertainment and keynote speaker, and the Terry film. It is $75 for the full night and $10 for just the Terry film showing. All the details and link to buy tickets arehttp://www.iowacitytorio.com/vip

More information on all of the fun activities during U.S. Olympic Team Trials week will be announced in the final month before the event.