The Lincoln CVB and the University of Nebraska to host at Bob Devaney Center, June 9-10

COLORADO SPRINGS, Colo. – USA Wrestling has announced that its most important domestic men’s freestyle event of the year, the 2017 U.S. Freestyle World Team Trials, will be held at the Bob Devaney Center on the campus of the University of Nebraska, on Saturday, June 10.

Held alongside the UWW Junior Freestyle World Team Trials, the event features top college and high school stars, and is set for Friday, June 9, also in the Devaney Center.

The winners of the U.S. Freestyle World Team Trials in the eight World Championships weight classes will earn a spot on the U.S. World Team which will compete in the World Wrestling Championships in Paris, France, August 21-26, 2017. 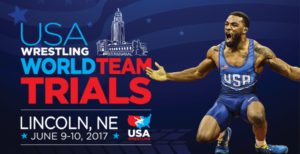 Tickets are now on sale for both events through huskers.com/tickets.

The local organizing committee includes the Lincoln Convention and Visitors Bureau partnering with University of Nebraska facilities to host the event.

Among the star athletes expected to compete at the U.S. Freestyle World Team Trials are Husker grads Jordan Burroughs, a 2012 Olympic champion and three-time World champion, and James Green, a 2015 World bronze medalist, both who train full-time in Lincoln with the Nebraska Wrestling Regional Training Center. Another top Husker star, T.J. Dudley, is also expected to try out for World Team. Husker wrestlers C.J. Red, Beau Breske, Eric Schultz and others are expected to compete at the UWW Junior World Team Trials, along with stars from other major Div. I wrestling programs and top high school programs.

“We are honored to be the host site for the 2017 U.S. Freestyle World Team Trials. Fans will be able to see local stars, four-time World and Olympic gold medalist Jordan Burroughs and World medalist James Green, plus others like Olympic champion Kyle Snyder and World champion Logan Stieber. This is tremendous for our fan base and the entire wrestling community. Lincoln is very convenient to get to for wrestling fans. The Lincoln Convention and Visitor’s Bureau has done a tremendous job organizing what will be a first-class competition,” said Nebraska head wrestling coach and 2016 U.S. Olympic Team coach Mark Manning.

The UWW Junior Freestyle World Team Trials will feature the best 17-20 year-old men’s freestyle wrestlers in the nation, including talented college underclassmen and high school wrestlers from across the nation. Many of the top UWW Junior-level stars go on to win World and Olympic medals for the United States in future senior level competitions.

“The Senior and UWW Junior World Team Trials will feature great competition. The renovated Bob Devaney Center is where the Huskers wrestle and play volleyball and is a great venue for wrestling. There are big scoreboards and the facility is first-class in all ways. The accommodations will be great for both the fans and for the wrestlers,” said Manning.

The last time that the U.S. Freestyle World Team Trials was held by itself, without the other Olympic disciplines of Greco-Roman and women’s freestyle, was in 1999, when the men’s freestyle event was hosted in Seattle, Washington.