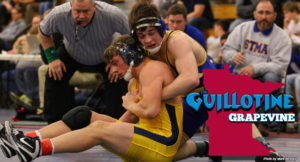 Episode 22 of The Guillotine Grapevine visits with Class 3A Rankings Editor John Nalan as we preview the 30th annual Minnesota Christmas Tournament.

While 3A teams are set to do some damage in Rochester, there’s also nine out-of-state teams coming into this year’s Christmas Tournament. Nalan previews the event in the December 9 issue of The Guillotine, but we also break down the fun things about this event, how it can signify the season truly is here in Minnesota and even what some people like to have as a pre-tournament meal.

We’ll also showcase the Milestones from Minnesota wrestling at the end of the show.