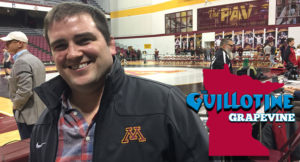 Episode 24 of The Guillotine Grapevine talks with Gopher alums Mack Reiter and Jayson Ness as they look back on the 2007 Minnesota wrestling team that captured the NCAA Division I Championship.

It was bittersweet for Reiter, who failed to place that season. Ness finished fifth as a freshman. Both outlined what made that team of various personalities a cohesive unit. Wrestlers from all over the country populated the lineup with one goal in mind.