I thought this might be a good time of year to try something a little different. A new wrestling movie was released on my Playstation last month, so I figured I should watch it. Since I ended up thinking it was a good film, I decided a movie review was in order.

The movie I watched is “American Wrestler: The Wizard”. It’s about a young Iranian who comes to the United States as an immigrant in 1980 at the height of the Iran Hostage Crisis. Based loosely on a true story, Ali Afshar is a high schooler who struggles to fit into his new life in California. Ultimately, Afshar finds himself on the wrestling team and it proves to be his salvation.

The story is a compelling one that I think will appeal to a lot of high school kids. It starts out in Iran shortly after fifty-two Americans are captured and held hostage at the U.S. Embassy in the capital city of Tehran by Iranian militants. Afshar’s parents don’t want him drafted into the Iranian Revolutionary Guard for military service, so they pay to have him smuggled out of the country so he can live with an uncle in California. 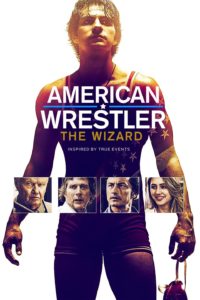 However, life in America is hardly the utopia Afshar imagined it to be. He’s singled out for harassment at school because of his Iranian heritage, and his uncle doesn’t have the money or desire to take care of him. He has no friends and no support system, either at school or at home. The bullying scenes are well filmed and a pretty realistic portrayal of the 1980s. True to the times, the school’s principal, played by Academy Award winner Jon Voight, isn’t too interested in solving any of the underlying problems Afshar experiences, he just wants to see the fighting stopped. If the problems don’t affect the principal, then, in his opinion, they’ve been solved. This only adds to Afshar’s frustration with the school.

Afshar struggles at his new school, trying various sports and activities in an attempt to fit in. Nothing seems to work out for him until he stumbles across the wrestling coach. After taking a few beatings during try-outs, he joins the team. He still struggles for acceptance, but slowly gains the respect of his teammates and the people around him. He discovers the uncle he lives with was a wrestling champion back in Iran. The movie has some nice scenes where the uncle bonds with Afshar and helps him train by sharing some traditional conditioning techniques and wrestling moves from Iran. As Afshar’s wrestling skills improve, the circumstances of his life do as well. He certainly has some ups and downs as the movie builds to its conclusion, but once he embraces the confidence his new sport gives him, he is better equipped to deal with the turmoil around him.

The movie does a great job of using wrestling as a metaphor for the progress Ali Afshar makes assimilating himself in his new country. The people in his life gain respect for him when they see the hard work and discipline he displays on the mat. I think young wrestlers today will identify with the main character’s struggle for acceptance. The struggle is symbolized in the movie by the letter jacket Afshar sees other students wearing and his desire to earn one for himself.

However, let’s be honest. Like most wrestling people who see a wrestling movie, the first thing I want to know is how realistic the wrestling is. I have to say, it’s not bad. The action on the mat gets a bit over the top at a few points in the movie, but for the most part it looks and feels like wrestling. Although you’ll see the Flying Squirrel and wrestlers bridging through a half nelson against state tournament quality wrestlers, there is also some solid takedowns, emphasis on getting the opponent out of position, and a few nice hip throws. I’ll admit I even got a little excited when the main character hit a surprise spladle to win a dual meet.

I have to say, however- one of the things that bothered me about the movie is that it didn’t always feel like it was breaking a lot of new ground in the genre of wrestling movies. More than once I felt like I was seeing a retelling of Vision Quest; a newcomer to the sport of wrestling puts in a lot of hard work in an attempt to beat his rival who is, inevitably, a returning state champion. However, a few of the twists in the movie are a little different. For example, it’s the returning state champion who cuts down a weight class to get a shot at humiliating the immigrant. But the whole idea of the bumbling newcomer developing into a top quality wrestler was still there, even if it was presented in a new way.

One thing I liked is how Actor George Kosturos portrays the main character, Ali Afshar. Kosturos was a basketball player back in his high school days, so he had to learn to wrestle as part of his preparation for the movie. He ended up looking like an experienced wrestler by the end of the film. I think the fact he had to learn to wrestle for the movie worked well because he did a very good job depicting an inexperienced wrestler during the early scenes in the film. The wrestling action was helped a lot by the fact many of the teammates and opponents in the film were current high school wrestlers. The good wrestling stances on their feet and natural reactions on the mat made the action in the film believable.

I graduated from high school at about the same time the movie was set in, so I saw a lot of the movie through the eyes of someone who lived and wrestled through the same time period. I felt like the movie effectively transported me back to the eighties. The clothing styles and the way the sets were designed all had an authentic feel to them. The attitudes displayed by the people in the movie toward Iranians, the willingness of the students to accept and act on stereotypes, and the rather cold relationships between the students and adults all rang true to me. The music was great too. It included several iconic songs from the time period including a pair of Loverboy classics, “Working For The Weekend” and “Turn Me Loose”, along with “I Want You To Want Me” by Cheap Trick. The overall effect was a pretty realistic depiction of the time period.

I would recommend wrestling people give the movie a try. It’s not only a good wrestling movie, but also explores a number of issues such as the challenges of fitting in at high school and the positive effects a sport like wrestling can have on young immigrants.

It would also be a good choice for a high school team to watch together. Ali Afshar’s teammates rally around him and are the first group in school to support and defend him.

Overall, I give the movie a thumbs up. I was glad I got to see the movie, and it was a fun change of pace to write about it this month. Wrestling fans, get out and see this entertaining and well-produced wrestling movie.

The movie had a limited theater release that ended last month, but can be ordered on DVD from ESX Entertainment. As I am writing this, it is also available on Netflix, Amazon Prime, and Playstation Network. Redbox isn’t loading it in their machines yet, but watch for it to possibly show up in the next few weeks.