MINNEAPOLIS  — MatBoss, wrestling’s premier VideoStats app, announced several enhancements for the 2017-18 season both in the app and in the cloud-based backend.

“Our big emphasis during the offseason was enhancing the user experience and focusing quite a bit on making things easier for coaches and wrestlers, allowing for an experience that is both easy and powerful,” said MatBoss president John Peterson.

MatBoss users will now have the ability add a match instantly with the touch of a button and go right to the recording screen using the quick add feature without having to pre-enter the match information. Users can go back later and edit the match details.

“A lot of people said when they’re at tournaments it can be difficult to get all the information entered before the match starts,” said Peterson. “This quick add is a way for them to add a generic match and start recording immediately.”

Other enhancements within the iPad app:

Fall times
Users can now enter actual fall times rather than the timestamp on the video.

Roster management
Now when MatBoss users connect to their account, every Trackwrestling roster for the schools within their state will be download automatically to their iPad. The rosters will continuously be updated throughout the season. Users will also have the ability to download rosters from other states.

Performance
The uploading of both data and video has been improved to give better performance.

Several enhancements were also introduced to the cloud-based backend, most notably the release of powerful new video features that allows coaches to search and sort by move. A coach can select a wrestler and watch just takedowns, or any other move, scored by or against that wrestler.

“I could see where this could be something really, really big,” Peterson said of new video features. 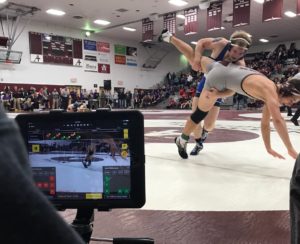 Other notable enhancement to the cloud-based backend are highlighted below.

Setup wizard
Teams will be introduced to a new setup wizard at the beginning of the season to set up things such as the roster, schedule and contacts.

Revamped highlight system
Users will now mark the highlight with a beginning point and end point.

Enhanced checks in the system that will limit duplicates

New reports for both season and caree

In addition, there are a multitude of bug fixes and performance improvements in both the app and cloud-based backend.

About MatBoss:
Created by coaches for coaches, MatBoss for iPad® integrates wrestling stats directly into the video you record for each match, completely replacing the need for labor-intensive pencil and paper scoring systems. Several of the nation’s top wrestling programs across all divisions of college wrestling and high school wrestling use MatBoss. For more information on MatBoss, visit MatBossApp.com.