The National Wrestling Hall of Fame and Minnesota Chapter is proud to announce the induction of Tim Penny as their Outstanding American from Minnesota. Donny Wichmann will receive the State Medal of Courage Award from Minnesota. Honorees for the Lifetime Service Award are Gerry Bakke, Dale Benjamin, Gary Hindt, Ted Lelwica, Marty Morgan, John Oxton, and J Robinson.

The Hall of Fame Banquet will be held Saturday, April 21, 2018, at the Austin Holiday Inn Conference Center, right off I-90, Exit 178A. The reception will begin at 2 p.m. and a Silent Auction will be held from 2 to 4 p.m.The banquet and induction ceremonies will begin at 3 p.m. This is an opportunity for you to honor these great individuals and to promote the positive aspects of our oldest and greatest sport – wrestling!

Minnesota Chapter Banquet Registration Form – please complete the appropriate sections and return to the address listed. You may also register online at: mn-nwhof.ticketleap.com. 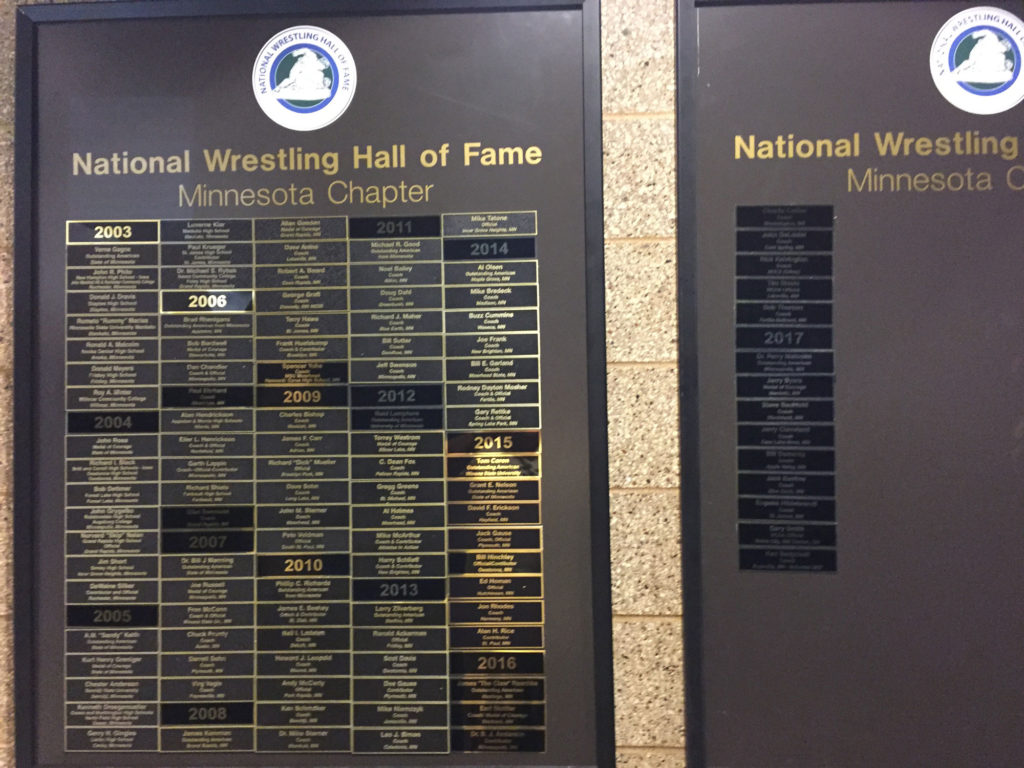 A National Wrestling Hall of Fame – Minnesota Chapter plaque was recently installed in the Rochester Regional Sports Center. People can view the plaque near the entrance to the RCTC wrestling room (small hallway after you pass the main floor concessions stand).

Tim Penny (Owatonna)
Tim was a standout wrestler his senior year at Keister High School under the late Coach Roger Goerish. Tim was Student Senate President at Winona State University. Tim served in the Minnesota State Senate from 1976-1982. Tim was elected to the U.S. House of Representatives in 1982. Tim served six terms through 1995. Tim was re-elected his last five terms with over seventy percent of the vote. Tim was best known for fiscal policy and for co-authoring three books. The past ten years, Tim has served as the President and CEO of Southern Minnesota Initiative Foundation. The Southern Minnesota Initiative Foundation specializes in Early Childhood, Economic Development, along with Grants and Loans. Tim always said that wrestling prepared him well for politics and professional life. “You’re an individual with a team approach.”

Donny Wichmann (Minneapolis)
Donny Wichman, former Marshall High School standout and Augsburg College All-American, will become the ninth Minnesota Chapter individual to receive the State Medal of Courage Award. Donny was considered “the glue on the coaching staff,” according to Head Coach Jeff Swenson at Augsburg College. Donny served eighteen years on the staff where they enjoyed ten NCAA III National Championships. Two years ago Donny was diagnosed with a brain tumor called Glioblastoma, the most aggressive brain cancer. Donny has constantly been an outstanding role model in how he handles adversity. Donny still shows up in the wrestling rooms and is the “Perfect Example,” on how to handle adversity. Donny shows up at wrestling practices and fits the wrestlers with new wrestling shows. We’re betting Donny will be one of the ten percent to beat this cancer.

Gerry Bakke: Coach (Buffalo)
Gerry Bakke was a standout wrestler for Albert Lea High School, Bethany Lutheran College, and Gustavus Adolphus College. He started his 30-year coaching career at Nashua High where his team placed fifth in the Iowa Class A State Tournament. Gerry moved on to Buffalo High School in Minnesota where he directed seven of his teams to the Minnesota State Dual Meet Tournament, placing as high as third. Gerry coached six individual state champions, 72 state entrants, and 30 state place winners. He coached two of his Cross Country teams to state as well.

Dale Benjamin: Contributor (Owatonna)
Dale Benjamin has been a top wrestling announcer in the state of Minnesota and beyond. He has announced wrestling on the radio for 41 years. Dale was selected as Wrestling USA Magazine National Broadcaster and Minnesota Broadcaster of the Year in 1993. Dale is a member of the Minnesota Wrestling Coaches Association Dave Bartelma Hall of Fame (2010) and the Mayo Civic Center Region 1 Hall of Fame. Dale has been “The Voice” of the NWHOF-MN Chapter Banquet DVD for 15 Years.

Gary Hindt: Coach (Wabasso)
Until very recently, Gary Hindt was the longest active head wrestling coach in Minnesota wrestling history. His long coaching career spanned 49 years until his retirement in May 2017. Gary finished as the second winningest coach in Minnesota with over 800 career coaching wins. His wins rank seventh in the USA for Most Wins in a Career. Gary is a two-time State Coach of the Year and a six-time Section Coach of the Year. Four of Gary’s teams advance to the Minnesota State Class A Dual Meet Tournament where they placed second and fourth. He was also a head football coach for 21 years. Gary coached over 100 athletic seasons at Wabasso. He was inducted into the MWCA Dave Bartelma Hall of Fame in 1994.

Dr. Ted Lelwica: Contributor (Staples)
Dr. Ted Lelwica served as the volunteer team doctor for the Staples and Sauk Rapids wrestling teams for 25 years. While at Staples, he served as the official Section 6A Tournament doctor for 16 years as well. Ted was in charge of weight certifications for Staples and Sauk Rapids and it was voluntary without any compensation. He also led the Staples team in prayer at their home meets. Ted was with the teams at state tournaments. The Staples Cardinals, under Coach Don Dravis, won seven state team championships in those years. Son John was selected as State Coach of the Year.

Marty Morgan: Coach (Mounds View)
For 23 years Marty Morgan has given back to the sport of wrestling as a coach. Marty, a great wrestler at the University of Minnesota, ended a 14-year title-drought by winning an individual national championship in 1991. He also won the Big 10 Medal of Honor. Marty was a two-time USA Greco-Roman National World Team Member (1993 and 1995). Marty served as Head Assistant to Coach J Robinson for 16 years. The Gophers won three NCAA Division I National Team Championships during that time. Since 2008, Marty has served as freestyle coach for the Mustang Youth Wrestling Club and is a current assistant at Mounds View High School.

J Robinson: Coach (Plymouth)
For over 40 Years J Robinson has given back to the sport of wrestling at the highest levels. J put the University of Minnesota Golden Gophers wrestling program on the national map. The Gophers won three NCAA Division I National Championships under his direction. J’s teams at Minnesota produced 405 career wins, won six National Duals titles, six Big 10 titles, 117 All-Americans, 14 individual national titles, and 30 individuals that claimed 47 titles in the strongest wrestling conference in the nation. J was selected four times as National Coach of the Year and eight times as Big 10 Coach of the Year, more than any other coach in Big 10 history. J Robinson Camps are the longest running in the nation.