Eustice, who has spent the last five years serving with the J Robinson Intensive Camps, initially as Camp Director prior to being promoted to Executive Director, has experience at every level of NCAA wrestling, competing at Division I and coaching at Division I, Division II and Division III.

“I want to thank Jim and Kevin (Buisman) for their efforts during this process,” said Eustice. “I believe Minnesota State can win at the highest level; we have a thriving university, first-rate facilities and great people in the department. Minnesota and the surrounding states have some of the best wrestling in the country and we are going to focus on bringing in young men that want to work at the process and reach for big goals.”

An assistant coach at South Dakota State in 2011-12, Eustice spent the 2009-10 and 2010-11 seasons as the head coach at Iowa Lakes. In his time at ILCC, Eustice led the Lakers to a 14-11 dual meet record and two top-10 national tournament places. ILCC qualified 17 wrestlers for nationals during his tenure, including a two-time national champion, six All-Americans and two Academic All-Americans.

Prior to his time at Iowa Lakes, Eustice served as assistant wrestling coach at Cornell College (Mount Vernon, Iowa). In his lone season, the Rams finished eighth at the NCAA Championships and had three All-Americans. 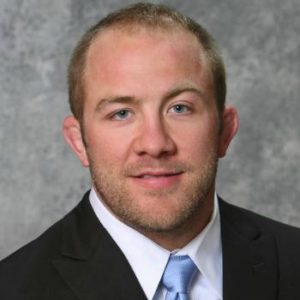 A native of Blue Earth, Minn., Eustice was a four-year letterwinner at the University of Iowa from 2001-06 where he compiled a 111-29 collegiate record. He was an All-American as a junior and senior, placing fifth and second at the NCAA Championships, respectively. Eustice received the team Mike Howard Most Valuable Wrestler his senior year and the team Mike McGivern Most Courageous Wrestler Award his redshirt freshman year. He was a two-time team captain, four-time NCAA Division I National Qualifier and a Cadet, Junior and FILA Junior National Freestyle All-American. Eustice graduated in 2006 with a bachelor’s degree in art.

“I’m excited to welcome to Ty back to the Maverick Wrestling program,” said Makovsky. “Ty is a complete coach. He is beyond a great technician. He coaches the individual from the inside out and that is important to me. He is a high energy guy who genuinely cares about developing our wrestlers in all phases of the student-athlete experience-success in the classroom, success on the mat and community involvement. When he was our graduate assistant from 2006 to 2008 we had two of the best years in MSU Wrestling history and he played a major role.”