That was the history facing the Shakopee Sabers’ wrestling team at Lakeville North High School when they advanced to the Section 2AAA championship match against defending state champion Apple Valley. When 220-pound freshman Tommy Johnson recorded a fall to give his team a ten-point lead with one match to go, the Sabers made history. They would go on to win the match 34-30 and return to State for the first time since 2004.

“It was so intense,” Shakopee junior Tyler Jones said. “Every match counted. They have been to State I think 35 years in a row, and we broke that streak. That feels amazing.” 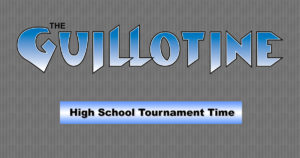 The Sabers – like when they defeated the Eagles earlier in the regular season – got out to an early lead. Back-to-back wins by Paxton Creese and Ben Lunn – who nearly picked up a fall – gave the Sabers an early 7-0 lead.

After Apple Valley picked up a fall at 120 Shakopee’s Jones trailed 4-1 in the third period. He mounted a furious comeback to pick up an 8-6 victory and with it three big team points for Shakopee.

“113 was a big win for us,” Shakopee head coach Jim Jackson – who helped build Apple Valley dynasty – said. “126 we came back and won a tight match. Those were huge for us. It was a total team effort.”

“I was down earlier in the match,” Jones – who wrestled at 126 for the Sabers – said. “I knew I needed to come back because it was a key match in the dual. It was 4-1, and I reversed him. Then I got three back points with a cross wrist. I was able to roll through and get the tilt.”

Apple Valley came back in a big way by tallying back-to-back falls to take an 18-10 lead, but Shakopee was a heavy favorite in the next two matches. Defending state champion Alex Lloyd did his job by getting a tech fall. Sam Webster kept things rolling for the Sabers with a tech fall of his own to inch back into the lead 19-18.

Unfortunately for Apple Valley, Tony Watts came into his match at 170 pounds against Joey Johnson with an obvious injury. He tried to gut it out but Johnson – a freshman whose twin brother Tommy would later clinch the dual – was too much for Watts. The 5-0 victory gave Shakopee a short-lived lead. It was short lived because Devin Roberts held a two-point lead late in the third period and cliched his match at 182 with a late takedown to win 6-2.

Three freshmen picked up wins for the Sabers. Following Tommy’s win, back-to-back pins by freshmen DJ Smith and Tommy Johnson would bring the Shakopee fans to their feet. They knew there was a new champion in Section 2AAA.

“It is great. (To see the freshmen have success) motivates other younger kids. It motivates me as well,” Lloyd – a senior – admitted, “because knowing these young guys are working hard and I have to work harder. The whole team is young. We are going to be very good later on too.”

The 34-30 loss ended a run of dominance I don’t know if we will ever see again. The night belonged to Shakopee, but I can’t finish this story without acknowledging the Eagles. Whether this is a one-year blip on the Eagles’ radar or the start of a run of state tournaments for Shakopee, it has been an unbelievable run for the greatest dynasty in Minnesota high school sports.

“I am so happy for our kids, our community,” Jackson concluded. “I am looking forward to trying to win a state championship. We came together tonight; I give the kids all the credit. Our coaches did an outstanding job; I am just happy for our community.”