St. Cloud State University 165-pounder Travis Holt (Stanchfield, Minn./Cambridge-Isanti H.S.) has been selected as the Northern Sun Intercollegiate Conference Wrestler of the Week for the week of Feb. 12-18.

Holt earned a 13-1 major decision victory over Augustana’s Regan Bye at 165 pounds on Thursday, Feb. 15 in St. Cloud, Minn. The victory provided extra points in the Huskies’ 34-3 triumph over the Vikings. 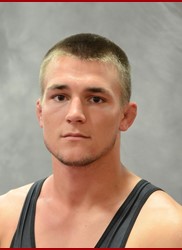 Holt ended his 2017-18 regular season with an impressive 21-3 record for the Huskies. SCSU completed its NSIC season with a perfect 8-0 record and gained its seventh consecutive NSIC title under the leadership of head coach Steve Costanzo.

The nation’s #1 ranked NCAA Division II team, St. Cloud State will host the 2018 NCAA Division II Super 3 Regional on Feb. 23-24 at Halenbeck Hall in St. Cloud, Minn. Fans can purchase tickets in advance at www.scsutickets.com or by calling 1-877-SCSUTIX. Tickets and two-day tournament passes will also be available at the gate on the days of competition.

The regional serves as the qualifying round for the upcoming 2018 NCAA Division II championships, which will be held in Cedar Rapids, Iowa on March 9-10.