South Dakota State University’s Seth Gross was named Monday as one of four finalists for the Dan Hodge Trophy, which is awarded annually to the nation’s top wrestler.

A native of Apple Valley, Minnesota, Gross capped his junior season by winning the 133-pound individual national title at the NCAA Division I Wrestling Championships last weekend in Cleveland, Ohio. Gross finished the year with a 29-1 overall record in which he recorded 12 pins and seven technical falls. A two-time NCAA finalist, Gross has compiled an 89-17 career record in his three seasons at SDSU. 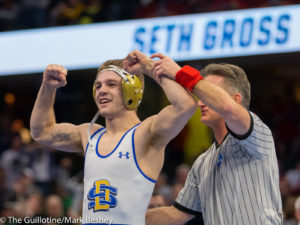 Fan voting is now open to help determine the Hodge Trophy winner and will conclude at 5 p.m. Friday (March 23). Other finalists are Penn State wrestlers Bo Nickal and Zain Retherford, along with Arizona State’s Zahid Valencia.

Criteria for the award include:
1. A wrestler’s record
2. Number of pins
3. Dominance on the mat
4. Quality of competition
5. Past credentials
6. Sportsmanship/citizenship
7. Heart

The winner will be announced on Tuesday, March 27. The winner of the fan vote will earn two first-place votes among the total ballots from a group of formal voters which includes each former Hodge Trophy winner, national media, representatives of national wrestling organizations and retired former college coaches from different regions.

The award, which is presented by ASICS and sponsored by WIN Magazine and Culture House, is named after the three-time national champion (1955-57) from the University of Oklahoma who never allowed a takedown in his college career. He also pinned 36 of his 46 victims. The Hodge Trophy has been presented annually since 1994.