A junior from Apple Valley, Minnesota, the top-seeded Gross came out victorious over second-seeded Stevan Micic of Michigan, 13-8, in his second consecutive national title appearance. Gross jumped out to a 6-0 lead as he registered a takedown midway through the first period and later turned Micic for a four-point near-fall.

Micic came up with a takedown off a neutral start to the second period, but Gross was able to escape to hold a five-point cushion heading into the final period. Micic turned up the pressure in the final two minutes, recording a couple more takedowns, but it was too little, too late as Gross secured the 13-8 decision.

Gross ended the season with a 29-1 overall record and upped his career mark to 89-17 in three years at SDSU. He became the first Jackrabbit wrestler to win a national title at any level since Paul Konechne won the last of his two consecutive NCAA Division II championships at 141 pounds in 2001.

The win by Gross upped the Jackrabbits’ team point total to 42, good for 12th place in the team standings. SDSU led all Big 12 Conference schools in the team race as David Kocer (seventh at 174 pounds) and Luke Zilverberg (eighth at 157 pounds) also earned All-America honors during the three-day tournament. 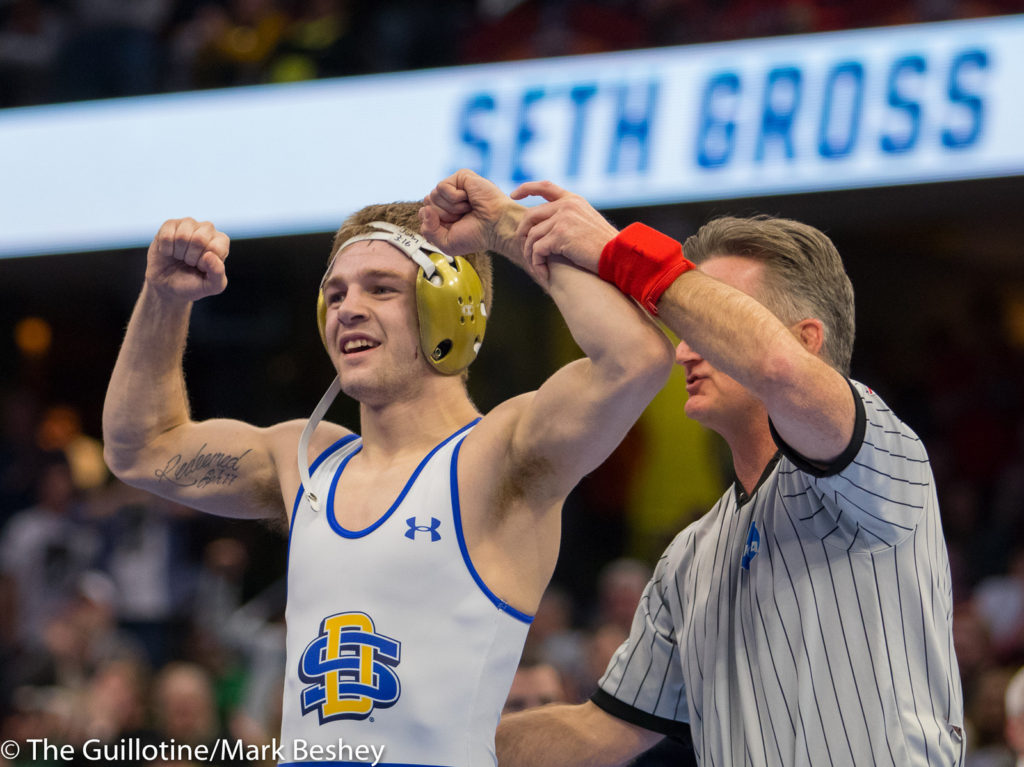 Following are Gross’ comments from his post-match press conference:

Q. History. And you’re in Brookings, South Dakota. What does it mean to have found a home and now to increase your success from a year ago?
GROSS: “Brookings changed my life and for the better. And just been good things ever since I’ve been here. And to be able to bring this national title back home to Brookings is huge. For the team, for the program, for the school, for everything, I’m just happy to do that. Give the glory to God. And, like I said, Brookings changed my life and got me to where I am.”

Q. South Dakota State, how does it feel?
GROSS: “It feels amazing. Best feeling ever right here. And something I’ve been working for my whole life. Again getting it done finally after getting second last year, there’s a chip on my shoulder this year, need to get it done.

“Had a crazy semifinals match, (indiscernible) pull that out, but gotta take a win where you can get it and felt good to go out there, get the early lead there. And here’s to the win. So that’s awesome. Feels amazing.”

Q. Seth, you were in the finals last year. What did you take from that match to make sure that you weren’t going to have that feeling that you had last year?
GROSS: “I prepared the same way, just mental things, not worrying about the match. I hung out with my family all day, acted like it was a normal day. Came over, warmed up, went out there. Didn’t stress out, sit around, thinking about what’s going to happen in the match, going through scenarios.

“Just thought I’m going to go out there and win the match, and just went through a regular day and came here and went to business and got it done.”

Q. Talk about the journey from, I mean, coming out of high school in Minnesota to now. And obviously a lot of steps and roads on the way, talk a little bit about it and how you got there to become a national champ.
GROSS: “It’s been a long road. If you told me four or five years ago that I was going to be a national champ for South Dakota I never would have believed you one bit. So it’s crazy.

“I started off at Iowa after high school and things happened and made some mistakes. But Coach Bono was willing to give me a chance, and can’t thank him or the school enough. As soon as I got there I knew I would do everything in my power to make the best of the second chance, and give the glory to God and that’s what I’m doing.

“I’m not done yet. I’ve got one more year left. So gotta keep living it up and hopefully go for that Hodge Trophy next year and just build off this. There’s no slowing down. I want to be an Olympic champ one day, so just a stepping stone and I’ll keep getting better.”

Following are SDSU’s complete results from the 2018 NCAA Division I Wrestling Championships: