Damion Hahn, who helped build Cornell into a national power over the past decade, was hired Monday to lead the South Dakota State University wrestling program.

“Damion represents everything we are looking for in being able to take our wrestling program to the next level,” said SDSU Director of Athletics Justin Sell in announcing the hire. “His success both as a collegiate wrestler and coach, along with his ability to recruit high-achieving student-athletes on and off the mat, made him the ideal candidate. He is a tremendous ambassador for the sport who will work tirelessly to ensure wrestling thrives both on our campus and across the country.”

In accepting his first head coaching position, Hahn will make a return to the Midwest. As a collegiate wrestler at Minnesota, Hahn won NCAA individual national titles as a junior and senior. A four-time All-American, he also was a three-time Big 10 individual champion and was named the Jesse Owens Big 10 Male Athlete of the Year in 2004. The Golden Gophers won team NCAA championships during both his freshman and sophomore seasons. 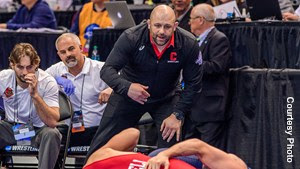 Dakota State University and am thrilled for the opportunity to lead a program that has such incredible support from the university and the community,” Hahn said. “I would like to thank Justin Sell and everyone on the search committee for giving me this opportunity. I am excited for the future of Jackrabbit Wrestling.”

At SDSU, Hahn takes over a Jackrabbit program that has risen in the ranks of Division I wrestling in recent years. SDSU has been nationally ranked each of the past three seasons and wrapped up its most successful season in March with a 12th-place showing at the NCAA Division I Wrestling Championships – best among Big 12 Conference programs. Seth Gross won an individual national title at 133 pounds, while David Kocer (seventh at 174 pounds) and Luke Zilverberg (eighth at 157 pounds) also earned All-America honors.

The Jackrabbits also finished the 2017-18 dual season with a 14-2 overall record, including an 8-0 mark against Big 12 opponents. SDSU won its final 14 duals to set a program record.

Hahn will begin his duties at SDSU on April 16.

Season tickets for the 2018-19 edition of Jackrabbit Wrestling are currently on sale at the Jackrabbit Ticket Office.