Ream, a redshirt senior from Wentzville, Mo., has a 3.977 G.P.A. in biochemistry and molecular biology. He is a three-time Academic All-Big 12 Wrestling first-team selection.

Ream completed in his fourth NCAA tournament appearance with a 1-2 record. He was 4-8 overall in NCAA competition. Ream compiled a 24-6 record this season including his second straight runner-up finish at the Big 12 Championships. He finished with 95 wins to rank No. 20 on the school’s all-time charts. 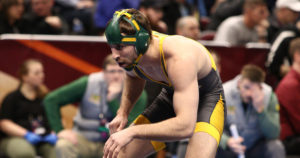 The Big 12 Conference established its Scholar-Athlete of the Year Award in 2012-13. A recipient is named in each conference-sponsored sport. Every Big 12 institution nominates one individual per sport with the winners selected by a vote of the league head coaches for that sport, who are not allowed to vote for their own student-athletes.

Scholar-Athlete of the Year nominees must be a junior or senior (athletic and academic standing), have a cumulative grade point average of 3.20 or higher, participate in at least 20 percent of the team’s scheduled contests and have a minimum of one year in residence at the institution.