The University of Minnesota’s M Club, one of the nation’s largest and oldest varsity letterwinner clubs, announced its 2018 Hall of Fame class. The nine-person class represents nine different Gopher programs, 26 All-America honors and nine national titles (individual and team). These Gopher greats will be officially added to the more than 350 current members of the Hall of Fame during the M Club Hall of Fame banquet on September 13 in the DQ Club Room at TCF Bank Stadium.

“It takes a special athlete to make a college team and earn a letter. To reach that level, where everyone is exceptional in some way, and then to become a stand out, to break records and earn awards and win championships, that level of greatness is what the nine people entering our Hall of Fame this year represent,” said M Club Interim Director Quincy Lewis. “The M Club Hall of Fame recognizes the most exceptional individuals in our department’s long history. Inclusion in the Hall of Fame is the most prestigious honor Gopher Athletics can present to an alumni athlete. I could not be more proud to present that honor to each person in this year’s Hall of Fame class.”

New inductees are nominated by a research committee that thoroughly reviews the accomplishments of hundreds of Gopher alumni from all eras. Approximately two dozen finalists appear on each year’s Hall of Fame ballot, which is then distributed to former and current coaches, athletics administrators and all University letterwinners for a vote to determine who will be added to the Hall of Fame each year.

More information about each individual in the 2018 M Club Hall of Fame class is below, listed alphabetically by last name.

Heather (Dorniden) Kampf (Women’s Track and Field, 2006-09)
Whether measured by a career’s worth of accomplishments or a single, defining moment, Minnesota’s own Kampf (an Inver Grover Heights product then known as Dorniden) left an unprecedented mark in program history. She was the Gophers’ first women’s track and field national champion, claiming the indoor 800-meter title in 2006. That same year she finished national runner-up in the outdoor 800 and would later finish runner-up at the 2008 indoor championships in the same event. Over the course of her career, Kampf earned nine All-America honors (the most in program history), along with four individual Big Ten championships and six Big Ten team titles. She’s also a standout in the program’s academic history, as its only two-time Academic All-American. 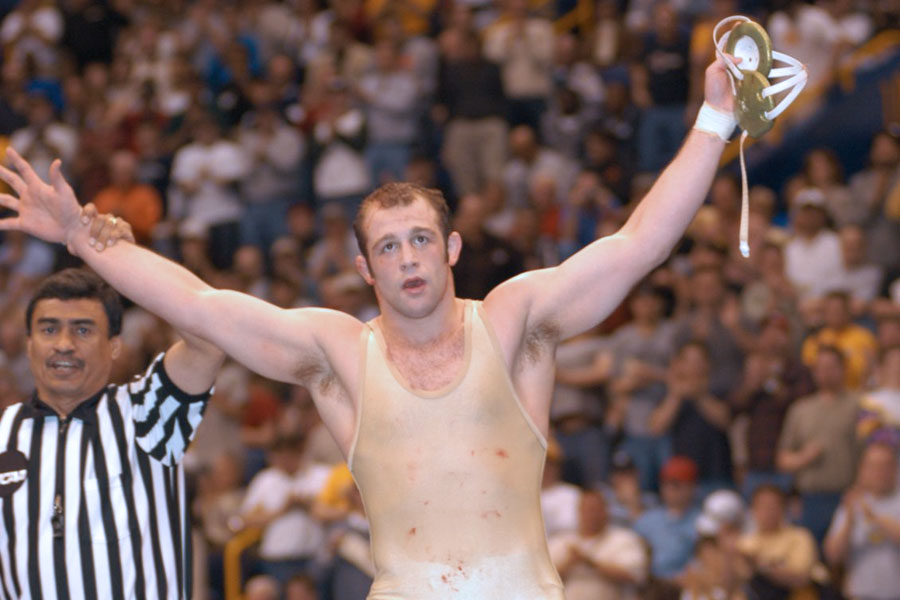 Damion Hahn (Wrestling, 2001-04)
When scanning the lists of Gopher greats based on outstanding achievements, Hahn’s name appears under almost every single heading. His career mark of 118-21 is certainly impressive, but he enters rarified air in a program built on championships for what he accomplished at the Big Ten and NCAA tournaments. The Lakewood, N.J. native was a three-time Big Ten champ as an individual (the fifth in program history), a two-time national champion wrestling 197 pounds (the program’s third multiple-time national champ) and a four-time All-American (the fourth in program history to reach that mark at that time). Hahn’s individual success helped fuel team success as well, a run that included three Big Ten team titles and back-to-back NCAA team championships.

Laurence Maroney (Football, 2003-05)
After bursting on the scene from St. Louis as the Big Ten Freshman of the Year (2003), Maroney continued to set new marks for greatness among Minnesota running backs. He followed that rookie campaign with First Team All-Big Ten selections in each of the next two seasons and First Team All-America recognition following his junior season, a year in which he set a new program record for season rushing yards. Following that season, Maroney was selected No. 21 in the NFL Draft by the New England Patriots. Despite playing just three seasons, Maroney is second all-time in rushing yards and 100-yard rushing games in Gopher history.

Janel McCarville (Women’s Basketball, 2002-05)
From her first days on campus, McCarville dominated on the hardwood. She was named the Big Ten’s Freshman of the Year and a Second Team All-Big Ten performer that first season. She went on to earn three First Team All-Big Ten honors, making her the first in program history to be all-conference in each of her four seasons. She went on to earn First Team All-America selections her junior and senior seasons, a span that included the program’s only Final Four appearance (2004) and led to her being selected No. 1 overall in the 2005 WNBA Draft. When she graduated, McCarville was the school’s career leader in blocks, second in career rebounds and fifth on the program’s all-time scoring list.

James McLean (Men’s Golf, 1998-00)
While only a select few golfers will ever know what it’s like to win an individual NCAA title, McLean knew that feeling after just one season with the Gophers. The conference’s Freshman of the Year became the program’s second-ever individual national champion – its first in 54 years – when he claimed the crown in 1998. To this day, the Australian holds the program’s record for career scoring average (71.49), a mark that has been virtually unchallenged, with the next best sitting a full stroke higher. He also holds the two lowest season scoring averages in school history, the two years in which he earned All-America honors. McLean helped lead the Gophers to the NCAA Finals three times before turning pro, where he went on to play on the PGA Tour from 2002-05.

Pam (Miller) Dombeck (Volleyball, 1983-86)
When her time with the Gophers ended in the mid-1980s, Dombeck (under her maiden name, Miller) departed Dinkytown as the program’s all-time leader in career blocks and kills, with her record for blocks standing for nearly a quarter-century. She led the conference in the category both her junior and senior year. She was recognized as All-Big Ten both seasons, including First Team honors as a senior in 1986. She was also named First Team All-Region that season. She was voted the team’s MVP as well, the second time she earned that honor in her career, as she led a squad that finished second in the Big Ten, the best finish in program history to that point. After her playing career, Dombeck served as an assistant with the Gophers and took over as the interim head coach for a single season (1995).

Chris Paulos (Softball, Field Hockey, 1976-78)
It’s difficult enough to letter all four years of a college career in a single sport, but Paulos accomplished the feat for two different Gopher programs, lettering four times in both softball and field hockey. She was a star of the field hockey pitch, earning the team’s most valuable player honor in three separate seasons. Paulos is the program’s all-time leader in career goals, single-season goals and game-winning goals. She also contributed to some of the most successful teams in Gopher softball history, playing for two College World Series teams. Paulos was inducted into the Minnesota Softball Hall of Fame in 1989.

Jim Peterson (Men’s Gymnastics (1943, 1947-49)
He was the first Gopher to ever win a national championship on the vault and even today, 70 years removed from that 1948 title, Peterson remains Minnesota’s only men’s vault national champion. In an odd twist, Peterson never won the Big Ten vault title despite winning eight individual golds during his Gopher career (still rings, two tumbling titles, two horizontal bar titles and three all-around championships). At the NCAA meet, Peterson was a five-time All-American, including a pair of runner-up finishes to go with his national title. In addition to his personal accolades, Peterson was a key piece during a dominant stretch for Minnesota, one in which the team claimed three straight Big Ten championships.

Justin Smith (Men’s Golf, 2001-04)
Holding the distinct honor of sinking the putt that clinched the program’s lone national title (2002), Smith has a highlight moment that punctuates an outstanding career. He finished fourth in the individual standings that year, the first of three consecutive All-America finishes. Smith, hailing from Moon Township, Pa., is one of just two golfers in school history to earn three All-America honors. He was a member of two Big Ten title teams, a two-time First Team All-Big Ten selection (including a runner-up finish at the 2004 Big Ten tournament) and a member of three teams that put together top-20 finishes at the NCAA tournament. Smith returned to Minnesota in 2014 as an assistant coach and currently serves as the program’s associate head coach.

Wrestlers/coaches previously inducted into the “M” Club Hall of Fame: