Hajas Jr., a Delano, Minnesota native, will wrestle at heavyweight for the Vikings and was a three-year letterwinner at Delano Senior High School. As a senior, he compiled a 33-3 record, with 22 of those victories coming via the pin. Hajas Jr. won the Findley Invite, the North Branch Invite, and the Section 2AA championship. He earned a second place finish at the Minnesota High School State Tournament and earned Academic All-State 2nd team honors.

As a junior, Hajas Jr. tallied a 39-7 record with 27 pins and won the 6AA championship and finished fourth at the state tournament.

“We are excited to sign another big guy with Steven’s ability. Steven has had a lot of high school success and we feel he will carry that over into his college career,” Reitmeier said. “Steven is what I would call an Augie kid. He’s super bright and motivated to succeed both athletically and academically. Steven adds to an already talented group coming in this fall.” 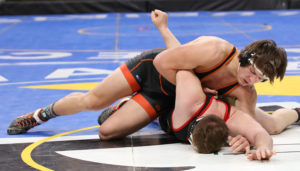