BETHELEM, Pa. – Former North Dakota State University All-American Hayden Zillmer is scheduled to wrestle for the 92 kg (202.8 pounds) spot on the U.S. Senior World team in freestyle against 2016 Olympic bronze medalist J’den Cox in the third bout of the Final X at Lehigh on Saturday, June 23. The main card starts at 7 p.m. Eastern Time in Grace Hall at Lehigh University, while the prelims begin at 5 p.m.

The event will determine the 2018 U.S. Senior World Teams in men’s and women’s freestyle wrestling. It will be a best-of-three series in each weight class, with the winner earning a spot on Team USA at the World Championships in Budapest, Hungary, October 20-28. 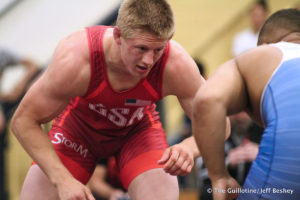 Zillmer, a native of Crosby, Minn., will square off against Titan Mercury WC’s Cox, who was the 2017 World bronze medalist. Representing the Minnesota Storm, Zillmer was the 2018 U.S. Open runner-up and has made the Senior National Team in both freestyle and Greco-Roman.

Cox has moved up to this new weight class and did not get an automatic berth in Final X because of the weight change. He edged Zillmer in the 2018 U.S. Open finals, 2-0. Cox won three NCAA titles and was a four-time All-American for Missouri.

As a best-of-three series, this order of bouts will be the same for the first round and the second round of competition. If any weight classes are forced to a deciding third match in their series, the bouts in round three will stay in order, with a minimum waiting time of 30 minutes from the end of bout two.

FloWrestling will provide exclusive live and on-demand coverage of the three-event Final X series. Watch the events across all screens by downloading the FloSports app on iOS, Roku, or Apple TV 4, as well as on desktop or mobile web via FloWrestling.com.