Becker graduated from Cambridge-Isanti in 1998 and was a member of the Bluejackets wrestling and football teams. As a wrestler, Becker won three individual state titles and amassed a total of 210 career victories, a mark that at the time made Becker the winningest high school wrestler in Minnesota history. 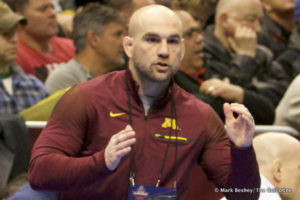 “It is pretty amazing that I have been gone longer than I have been there,” said Becker. “I was fortunate enough to do some good things in my high school career, and to be known and honored because of what I was able to accomplish there is pretty cool.”

The Bluejacket wrestling team qualified for two state tournaments while Becker was a part of the squad. Piling into the busses and making the trip down to the Twin Cities for the tournament is something that Becker said he will not soon forget. It’s those memories that he cherishes most of all.

Becker went on to start for the University of Minnesota where he was a 2002 NCAA National Champion, a member of the 2001 and 2002 National Championship teams and a four-time NCAA All-American. Becker was also dominant in the Big Ten winning a conference championship in 2002 and 2003 and team championships from 2001 to 2003.

“He has represented his family, his community and the University of Minnesota with a lot of class.” Becker’s high school wrestling coach Neil Jennissen said. “He is the kind of person that a lot of people look to. A great role model and a great leader and we are all really excited for his opportunity to be in the second Bluejacket class of the hall of fame.”

Jennissen has continued to follow Luke’s wrestling career long after he left for the University of Minnesota. 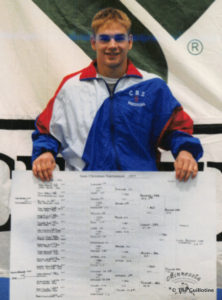 “The biggest thing about Luke, even in high school, was that he cared about his team a lot,” said Jennissen. “His senior year, in 1998, our team qualified for the state tournament. I think he took as much pride and ownership in that as he did in his own individual accomplishments. That is Luke, he is all about looking out for other people and his team, and I think that is why he is such an outstanding coach at Minnesota.”

The following from his community is something that Becker valued throughout his wrestling career.

“It is not easy to have success at this level without a ton of support. To have your town or your family close by that can come and support you,” said Becker. “There is something about being a Minnesota kid, coming up through the state of Minnesota. To be able to come to the University and compete, and have success, is something that is pretty special.”

About the Bluejacket Hall of Fame:

Cambridge-Isanti High School has a long and rich tradition of athletic competition and fine arts accomplishments. The purpose of this Hall of Fame is to recognize the outstanding alumni who have brought honor to themselves, their school, and their community. This Hall of Fame will also recognize distinguished alumni. Coaches, advisors, directors, and community members who have given substantially of themselves for the good of Cambridge-Isanti High School and its Athletics, Fine Arts, and Activities Department.

Criteria included in selection: must be out of school for ten 10 years, nominees must exemplify character, and be a positive role model, worthy of being emulated by current and future students, success during high school career and post-high school career are included as well.