St. Cloud State was chosen as the favorite to win the conference with eight first-place votes and 64 points total. Upper Iowa comes in second at 53 points, Minnesota State at third with 51 points, Augustana in fourth place with one first-place vote and 46 points overall, UMary comes in at fifth with 28 points, MSU Moorhead at sixth with 27 and SMSU at the seventh spot with 22 points.

Minot State and Northern State round out the poll at eighth and ninth with 18 and 14 points respectively.

Jesse Nelson begins his 12th season as head coach of the Mustangs and has 33 athletes on the roster that includes five seniors, eight juniors, four sophomores, three redshirt freshmen and 13 true freshmen. The Mustangs return eight wrestlers that competed at the NCAA Super Regional last February. 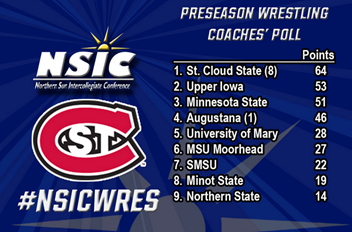 Junior heavyweight Andrew Petersen recorded 18 victories a season ago and placed fifth at the NCAA Super Regional. He opens the season ranked No. 11 nationally.

Junior 149-pounder Justin Haneke also returns after racking up 20 victories last season, including 4-3 in NSIC matches. At 197 pounds, junior Jackson Ryan returns following a 14-12 season in which he finished sixth at the NCAA Super Regional. Also returning is junior Cole Hennen at 184, who finished 6-2 in conference duals last season and won 14 matches overall. Senior Kegen Fingalsen is back at 165 and has racked up 59 career victories, including a pair of 20-plus win seasons.

Southwest Minnesota State opens the 2018-19 season on Nov. 10 at the Dakota Wesleyan Open. SMSU’s first home dual match of the season is the conference opener Nov. 29 versus St. Cloud State.

Check out Mustangs Wrestling at smsumustangs.com and on Twitter.