Wrestling in the 174 lb Bronze Division, Toedter reeled off wins against Daniel Alonzo (Nebraska Wesleyan University), Terry Jackson (William Penn University) and Toby Hintzman (Itasca Community College) on his way to the first place podium. Toedter’s wins against Alonzo and Hintzman were both by way of decision (4-2 & 9-3), while his win over Jackson was via fall at the 2:18 mark of the match. 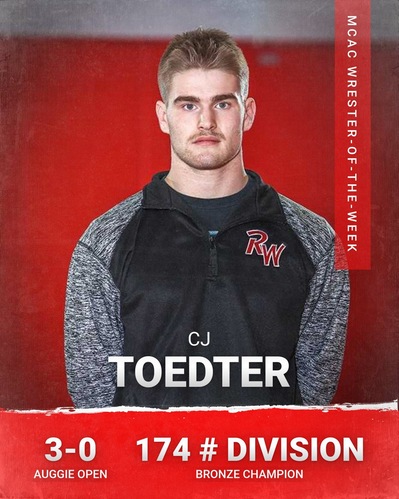 Toedter and his Ridgewater College Warrior teammates will next compete at the Moorhead State Open on December 1, 2018.

Notable Performances From Around the Minnesota College Athletic Conference:

Caleb Clobes, a freshman at Rochester Community & Technical College from Madelia, Minnesota won the Augsburg-Adidas Open Championship in the 125 lb division with a perfect 4-0 record this past weekend. En route to the first place finish, Clobes claimed a 12-5 decision over Issac Wiegel (UW-Platteville), pinned Antonio Lomeli (Central College) in 2:03, won by technical fall 16-0 over Jacob Ragsdale (Upper Iowa University), and in the finals pinned Jared Hensley (Upper Iowa University) in 4:22. Clobes has earned 9-2 record on the year at 125.

Andre Baguma (Fargo, ND), a freshman wrestler at Northland Community & Technical College, wrestled his way to a second place finish in the Finn Grinaker Open at Concordia (MN) College on Saturday. Baguma pinned Elijah Osit of St. Cloud State to open the tournament and knocked off Concordia starter Noah Carter 7-2, before falling to Steven Hajas 6-0 in the championship. Baguma’s 2nd place finish earned his Pioneer team 17 points in the event.

The Minnesota College Athletic Conference is the organizational body for NJCAA-affiliated two-year technical and community college athletic programs in the Minnesota State system. The mission of the Minnesota College Athletic Conference is to advance intercollegiate athletics by providing an engaging and supportive environment for the success of our student-athletes and competition among member institutions. The MCAC is committed to the guiding principles of encouraging the development and success of student-athletes, promoting the integrity, honesty, and loyalty to member schools as well as upholding the sustainability of conference athletic programs.