Former Kasson-Mantorville star Brady Berge has had two serious scares with concussions while wrestling at Penn State. But he is healthy now and carries a new, grateful mindset.

Brady Berge couldn’t help but wonder if his sterling wrestling career might be over.

He was in a fog and with headaches, nausea and an aversion to bright lights after what happened to him in October of 2019 at the World U23 Championships in Budapest, Hungary.

The 2017 Kasson-Mantorville graduate and current Penn State redshirt junior had been clipped on the head by an opponent’s knee. It was severe enough — the knee making contact in such a dangerously precise way — that it had left him unconscious.

Once Berge did come to, he was alert enough as he lay in a Budapest hospital bed to realize that he had no feeling in his legs. Continue reading at postbulletin.com →

Kerkvliet, who wrestled freestyle at 125 kg (275.5 lbs.), defeated Lior Altshuler of Israel 10-0 in his first match. He then pinned Salim Ercan of Turkey at 2:34 in the quarterfinals.

Claiming silver medals were Aaron Brooks at 79 kg and Zach Elam at 97 kg.

2017 Cadet World champion Brooks had a back-and-forth battle with Hayato Ishiguro, who was third at the Japanese Senior World Trials. The bout ended with 21 points on the board and an 11-10 win for Ishiguro.

Brooks scored first with a takedown, but Ishiguro responded quickly with a takedown and gut wrench. At the break, Brooks led on criteria, 4-4. The second period saw points flying, which included three takedowns and exposure. Continue reading at www.teamusa.org

TRNAVA, Slovakia – In only his third freestyle tournament of his career, Mekhi Lewis advanced to the Junior World semifinals at 70 kg with two quick wins on Saturday morning in Trnava, Slovakia. His wins included a technical fall and a pin.

Against Erik Reinbok of Estonia, Lewis scored takedown after takedown to open his first international tournament with a 10-0 win.

The quarterfinals put the Virginia Tech wrestler against South Africa’s Matthew Bartlett, who is a four-time age-group African Championships silver medalist. Lewis was on the board quickly with a takedown, putting Bartlett to his back and securing the fall at the 1:04 mark. 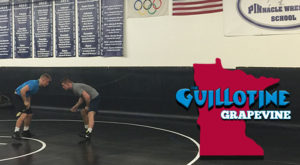 The JJ Classic Clinic is open to wrestlers ages 5-18 who attend the JJ Classic ($7 admission) or compete in the event. There is no pre-registration. Doors open at 8 a.m.

The Minnesota Wrestling Coaches Association annually presents the Mr. Minnesota High School Wrestler award to the senior that best exemplifies the highest ideals of high school wrestling in Minnesota. Judging is based on past performances, citizenship, academics, leadership, and adherence to MSHSL rules. This year the committee is proud to recognize Kasson-Mantorville’s four-time state champion and nationally number one ranked wrestler at 160 pounds, Brady Berge.

By the end of the 2016 State Wrestling Tournament, there were two names on the mind of every wrestling fan in attendance. For good reason, Apple Valley's six-time champion Mark Hall – no matter what was going to be the story of the tournament, but the tournament experience of a guy who ultimately placed sixth would grab a fair share of the drama.

Brady Berge's team, the Kasson-Mantorville KoMets had already taken home the Class AA state title on day one of the tournament and the junior – hands down the favorite to win gold in the AA 160-pound weight class had rolled through the first two rounds of the individual tournament with a pin and a tech fall. As his semifinal match started, it looked like the three-time state champion was on his way to the finals again.

"Before the match, I was calm – like I usually am before matches," Berge recalled. "The first period I took him down and turned him a couple of times. I had like a 7-2 lead going into the second period. It was my choice and like I do every other match when I have choice I chose down. I stood up to get an escape, and I went to turn, and my foot caught the mat, and I came down on it. It just bent in a way it shouldn't have. There was a lot of weight going down on it too so it snapped. I knew it was broken right away."