Jude Link of Dassel-Cokato/Litchfield has committed to wrestling for University of Iowa next season.

Ryan Sokol of Simley has committed to wrestling for Iowa in 2021-22.

Police are charging University of Iowa wrestler Sam Stoll after they say he lied to law enforcement about the gunshot wound he sustained earlier this month.

Stoll told police he lied to protect the friend who shot him, according to a police complaint from the Iowa City Police Department.

From the emergency room on June 19, Stoll initially told police that he shot himself in the knee while sitting inside his own garage, according to a police report. Upon investigating, officers determined that the shooting did not take place at Stoll’s residence.

When officers confronted Stoll again, the wrestler’s story changed, according to the report. Stoll reportedly redacted his initial statement and told police that he was shot while playing a prank on a friend at that friend’s Iowa City home. Continue reading at www.press-citizen.com

University of Iowa wrestler Sam Stoll has been hospitalized after suffering a gunshot wound early Tuesday morning. The injuries are not life-threatening.

The call to authorities was made at 4:37 a.m., and quickly after, Stoll was taken to the University of Iowa Hospital.

According to an Iowa City Police press release, Stoll was shot accidentally in the knee. The release also pointed out that thanks to a preliminary investigation, “several individuals” were at the Valley Avenue residence when the incident took place. Continue reading at daily-iowan.com

Patrick Kennedy of Kasson-Mantorville has committed to wrestling for Iowa after his upcoming junior and senior seasons.

2017 Shakopee state champion Aaron Cashman has committed to wrestling for Iowa next season. 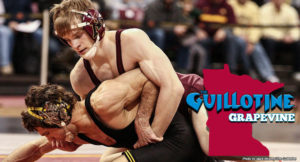 Episode 25 recaps the Iowa-Minnesota dual at the Sports Pavilion in Minneapolis as Iowa defeated the Gophers 27-11 on Super Bowl Sunday. We’ll get the Iowa side of things with coach Tom Brands and polarizing 125-pounder Thomas Gilman and then we’ll talk to Brandon Eggum after his first home dual officially as the new man who will lead the Gopher wrestling program.