Jared Lawrence and Brandon Paulson are helping Minnesota wrestlers reach the next level through the Pinnacle Wrestling School.

While Minnesota has a well-earned reputation and a perennial marketing plan touting it as the ‘State of Hockey’, we are witnessing considerable growth in other winter sports. One sport where Minnesota is particularly on the rise is wrestling.

“We’re not one of the top states” said former U of M wrestler Jared Lawrence. “I mean, Pennsylvania, Ohio, Oklahoma, those guys are ahead of us, but we’re definitely top eight for sure and climbing.”

“The last three years are the best we’ve ever had come out of the state,” said fellow former Gopher Brandon Paulson. “We have more division one wrestlers than we’ve ever had, and the greatest international success we’ve ever had as far as the age groups, so I think wrestling is in a good spot as far as interest.” Continue reading at www.kare11.com

As Team USA heads to the Junior World Championships, we’ve got a number of Minnesota tie-ins to discuss and we’ll do that on Episode 46 of The Guillotine Grapevine with Pinnacle’s Jared Lawrence.

Lawrence looks back on his own experience at the 1999 and 2000 Junior World Championships and talks about his prospects on how the Minnesota natives will fare in Slovakia. We’ll also ask Lawrence some Gopher-related questions from his time in the lineup pitched to us by Minnesotan Chris Willaert, who for some reason, didn’t attend the Rio Olympics with Mike Quamme.

Pinnacle School of Wrestling founder Jared Lawrence joins ON THE MAT to talk about his wrestling club and more.

“On the Mat” is a presentation of the National Wrestling Hall of Fame Dan Gable Museum and is hosted by the Director of the Dan Gable Museum, Kyle Klingman, and Trackwrestling Content Manager Andy Hamilton. 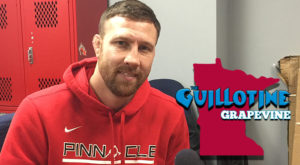 The PINnacle Wrestling School has been one of the nation’s most successful in recent years. Co-founded by Jared Lawrence and a handful of former University of Minnesota wrestlers, PINnacle has evolved over the last 10 years into a program college coaches notice.

Lawrence talks about the foundations of the club, the new location in Roseville, how college coaches trust he and fellow club runner Brandon Paulson and what the club opts to service and promote.