Former St. Cloud State wrestling captain and first-year Graduate Assistant Coach Travis Holt joins John Peterson on the Husky Grappler to discuss how the preseason has gone so far and what fans may expect with the season just around the corner. 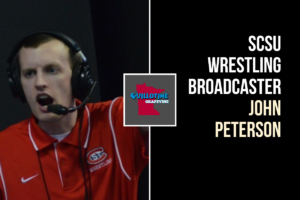 The National Wrestling Media Association has announced its annual award winners for the 2017-18 season, and the list includes KVSC’s John Peterson, who was named the NWMA’s Broadcaster of the Year.

For the past six years, the radio and internet voice of St. Cloud State Husky wrestling has been Peterson. A Minnesota native, Peterson has provided the soundtrack for three of St. Cloud State’s NCAA Division II Championships as well as regular-season duals both on KVSC 88.1 FM and the station’s online streaming outlet. Peterson has also been the voice for NCAA.com Division II Championship broadcasts.