BYDGOSZCZ, Poland – The U.S. U23 Men’s Freestyle World Team wrapped up its first day of competition at the U23 World Championships in Bydgoszcz, Poland, on Sunday.

Team USA was unable to qualify a wrestler for the medal matches, going 0-4 on the day.

“Overall, I think Daton (Fix) and Mitch (McKee) wrestled good but not great,” Manager of U.S. Freestyle Programs Joe Russell said. “At the World Championships, you have to wrestle great. Head position and putting up a couple of shots were the problems for us today. We can’t rely on guys to pull us back in. I don’t think Sammy (Brooks) and Michael (Kroells) gave themselves a chance today. You have to be stingy with these international guys.” Continue reading at www.teamusa.org

BYDGOSZCZ, Poland – The first half of the men’s freestyle team weighed in and received draws for Saturday’s competition of the 2017 U23 World Championships in Bydgoszcz, Poland.

The Oklahoma State true freshman will take on Parviz Ibrahimov of Azerbaijan in his first match at 57 kg/125 lbs.

Ibrahimov’s most recent medal came from the Ali Aliev Tournament in July, where he won bronze.

Mitchell McKee (Hanover, Minn./Minnesota Storm) also enters his second World tournament of the year after scoring a silver medal at this year’s Junior Worlds in Finland. Continue reading at www.teamusa.org

With the University of Minnesota wrestling team set to take the holiday weekend off, one of the biggest wrestling events of the year will be taking place in Bydgoszcz, Poland at the U23 World Championships.

The Guillotine Action Photos from the 2017 USA Wrestling U23 World Team Trials. October 8th at the Mayo Civic Center in Rochester, Minn.

ROCHESTER, Minn. – It was a fantastic finish as the final 12 weight classes were determined in the finals series of the USA Wrestling U23 World Team Trials at the Mayo Civic Center on Sunday.

All eight men’s freestyle team members were determined, as well as the final four Greco-Roman spots, in a best-of-three series in each weight. This is the qualifying event in all three Olympic disciplines for the U23 World Championships, set for Bydgoszcz, Poland, November 21-26.

In a highly anticipated finals, 2017 Junior World champion Daton Fix defeated NCAA champion Nathan Tomasello, who is No. 3 on the Senior National Team, in two straight bouts in the men’s freestyle finals series.

Fix, a freshman at Oklahoma State, won a pair of back-and-forth bouts against the three-time All-American for Ohio State. In the first match, with Fix leading 8-7, Tomasello scored a last second takedown and was given a 9-8 victory. Fix’ corner challenged and the points were taken away, giving Fix a thin one-point win. Continue reading at www.teamusa.org

Both a current and a former University of Minnesota wrestling standouts earned a spot on the U23 Team USA roster for the U23 World Championships that are set in Bydgoszcz, Poland on Nov. 21-26.

McKee won his bracket in 61-kilograms and did not give up a single point until his second match in the finals, where he won 15-4. 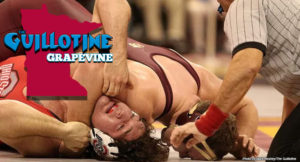 It was senior day for a number of Gopher wrestling seniors as Minnesota hosted Ohio State in the final home dual of the year at The Sports Pavilion. On Episode 26 of The Guillotine Grapevine, we’ll visit with two of the best Gopher seniors, Michael Kroells and Brett Pfarr after the 24-20 loss to Ohio State on senior day.

We’ll also catch up with Gopher head coach Brandon Eggum about the team’s performance and what he had to say about Ethan Lizak specifically.