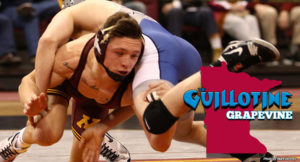 The April 13, 2007 issue of The Guillotine has arrived! Content in this issue includes: Gophers Golden in Auburn Hills | Lace ‘em up | Mavericks finish 4th at Nationals | Ask The Doc | Camps, Clinics, and Training | Coaching change for Augsburg | The View From the Matbird Seat | NCAA DI Championships | Rosemount Wrestling - It gets in your blood | One Career Ends, Another Begins - Bob Dettmer | Where Have They Gone? | Officially Speaking | Team MN at NHSCA Championships | MWCA Awards | Through the Eyes of Mom.