In the main event, Sanders will face two-time NCAA Champion and 2020 Hodge Trophy Award winner Spencer Lee, a senior for the Iowa Hawkeyes. Currently a volunteer assistant coach for Minnesota, Sanders was a four-time All-American from 2009-12 and finished sixth in Gopher history with a 134-27-1 career record.

Held at Kohler Fieldhouse in East Stroudsburg, Pennsylvania from May 3-5, the highest placing wrestler at each weight that is not already qualified will earn a qualification to the 2019 World Team Trials in Raleigh, North Carolina from May 16-19.

The day after the Big Ten Champions, Gophers volunteer assistant coach Zach Sanders flew to one of the coldest parts of the world: Yakutsk, Russia. In Yakutsk, Sanders competed at the Freestyle Wrestling World Cup.

As soon as the competition ended, Sanders flew back to America, but this time went straight to Pittsburgh for the NCAA Championships. In the span of two weeks, Sanders coached the Maroon and Gold at their two biggest postseason tournaments in addition to pushing himself against global grapplers.

“I was obviously excited, but it was brutal in a way,” Sanders said of the nearly 18 hours in the air. “It was awesome to be out there, but also by the end I was ready to back with the guys.”

Sanders (’12), a four-time All-American, is also a volunteer coach for the Gopher wrestling team. He’ll comete at 57kg after a career with the Gophers at 125-pounds.

Hear from University of Minnesota Assistant Coach Zach Sanders, Gable Steveson, and Sean Russell in this week’s Gopher Wrestling Match of the Week. 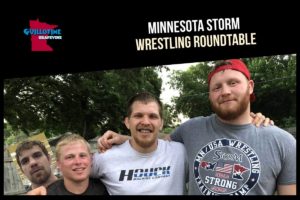 Representing the state of Minnesota this weekend at Final X – Lehigh will be Hayden Zillmer and Zach Sanders, looking to secure Senior World Team spots for the first time in their careers.

Hayden Zillmer, a Minneapolis, Minn. native, will wrestle in the 92-kilogram best-of-three series against former Olympic bronze medalist J’den Cox. Current Assistant Coach Zach Sanders will wrestle for a true third place finish against Tony Ramos earlier in the day, which will all be shown on FloWrestling.

The true third place matches will take place at 5:00 p.m. at Grace Hall on the campus of Lehigh University on Saturday, June 23, with the main card beginning at 7:00 p.m. Continue reading at www.gophersports.com